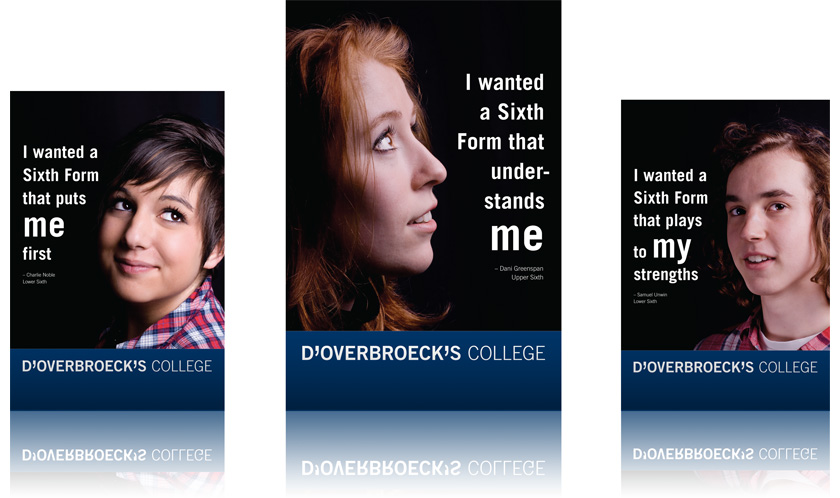 These are examples of adverts we designed for a print advertising campaign run by d'Overbroeck's Sixth Form – an Oxford educational establishment described by the Good Schools Guide as ‘quite possibly the leading independent sixth form in the UK’.

What the adverts aimed to achieve

A goal of the campaign was to prompt students or parents who might be receptive to the idea of changing to a new school for sixth form. Running relatively late in the academic year, the ads were targeting those who had not necessarily planned a change, but were beginning to consider one.

As a result, we wanted a campaign that strongly resonated with students and parents increasingly disillusioned with their current school and seeking a new environment that would better fulfil their needs at sixth form.

We began the campaign planning with a focus group of students currently at the College. After a wide-ranging discussion about their opinions and experiences of sixth form life, we began to focus in on the distinctive features of the College. Certain themes emerged – chief amongst which was the College's habit of putting students' needs first.

We designed this campaign around that concept.

Working with the sentiments expressed by the focus group students, we designed a range of three strongly personal ads – each featuring a student and a short quotation.

The style of the photography deliberately places strong emphasis on the students' faces, with dramatic lighting to enhance the eyecatching effect. All of the photography was conducted by ourselves, with the use of studio lighting.

Adverts ran for a month at bus-stop sites around Oxford, and simultaneously for three weeks in the local print press (primarily the Oxford Times).

Tom Parnell works at d'Overbroeck's College, and produced the above designs as in-house work.