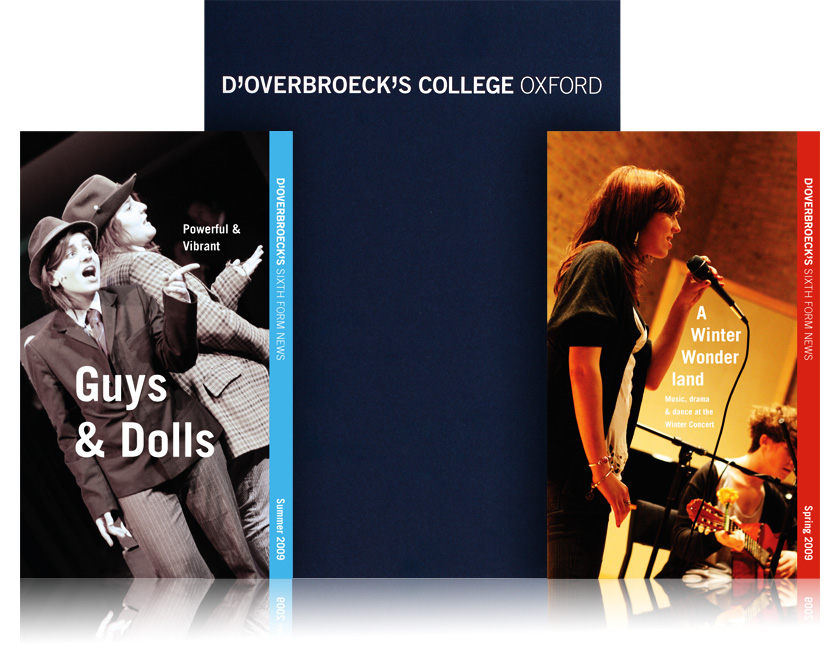 The longest-established section of d'Overbroeck's College is its independent sixth form, which takes around 240 students of around 16-18 years old. The College is a busy, buzzy place, with students achieving great things both in and out of the classroom.

Choosing a school is always going to be a big decision. Add to this the fact that it is not the norm to change school at Sixth Form, and you can see that it's important for an independent Sixth Form to produce excellent printed publicity materials.

Our design and copywriting work at d'Overbroeck's College (we also produced the College website) needed to work on two levels and cater for two distinct main audiences: prospective students and their parents.

While a student may be attracted by increased independence, a more liberal collegiate atmosphere and the absence of 'traditional' school strictures such as uniform, assemblies and rigid hierarchies, a parent may want to be reassured about academic rigour, pastoral care and systems to ensure that their child achieves the best exam results.

Market research that we've carried out at d'Overbroeck's Sixth Form implies that the decision to move to the College at this stage is often prompted by pressure from the student – who may take a much more active role in decision-making than, say, when moving schools aged 11 or 13. 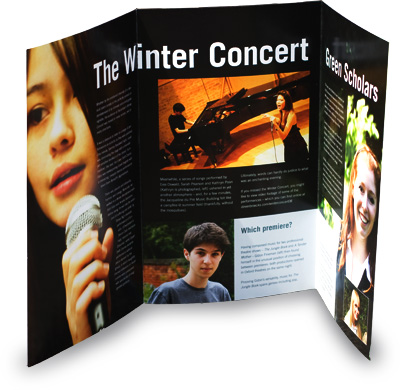 We therefore faced the challenge of making d'Overbroeck's Sixth Form's printed publicity materials enticing, exciting and different enough to entice students to move from their current school (and their established friendship groups) – but simultaneously reassuring, substantial and serious enough to persuade parents that this wouldn't be a dangerous move.

Our first step was to design a termly newsletter – to be sent out to enquirers along with the Sixth Form prospectus. The central purpose of this product is to excite. A strongly visual-heavy design features students engaged in activity, be it drama or music, entrepreneurialism or activism.

To keep printing costs down, the design is a large-format folding brochure, printed on both sides (a stapled/bound publication would be considerably more expensive), and the emphasis is firmly upon visual impact. Stories are written up concisely, and accompanied by strong original photography (almost exclusively ours) and a design that puts student achievements and activities centre stage. 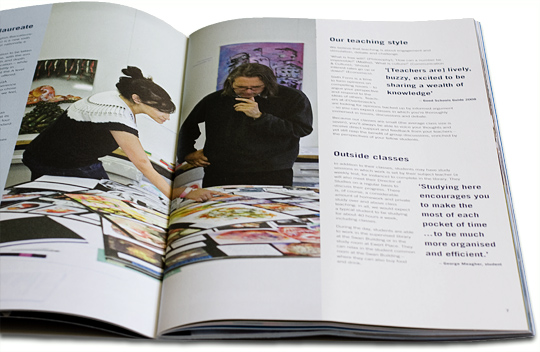 ... And an informative school prospectus

We redesigned this product, too, introducing full-bleed photography and strong use of colour to balance out substantial and detailed subject matter. This document is ostensibly targeted more at parents – and because the newsletters accomplish the goal of showing vibrancy and variety, this frees up the prospectus to focus on more 'serious' issues: pastoral care, supervision, results, curricula...

We also designed a folder to contain both prospectus and latest news publications.

Tom Parnell works at d'Overbroeck's College, and produced the above designs as in-house work.